I Carry You with Me

Ambition and societal pressure propel an aspiring chef to leave his soulmate in Mexico and make the treacherous journey to New York, where life will never be the same.
(R, 111 min.) 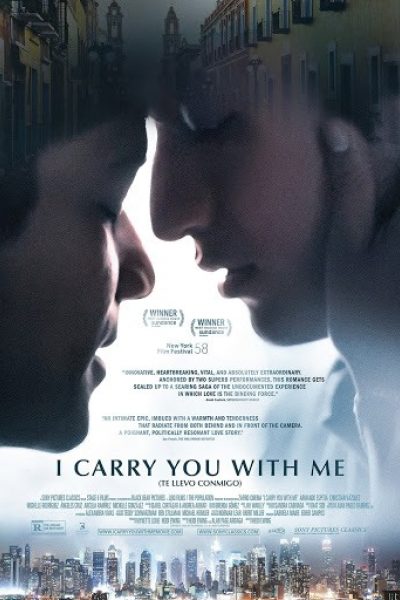 Based on true love, this decades spanning romance begins in Mexico between an aspiring chef (Armando Espitia) and a teacher (Christian Vázquez). Their lives restart in incredible ways as societal pressure propels them to embark on a treacherous journey to NYC with dreams, hopes, and memories in tow.

"You can see and feel Ewing's love for her characters in beautifully natural ways."

"I Carry You With Me is an emotional powerhouse that had me and the other moviegoers crying our collective eyes out."

"I Carry You With Me poignantly captures the ache, the beauty of the characters’ love, and the pieces that get left behind in pursuit of something new."

"Director Heidi Ewing makes a powerful narrative debut with I Carry You with Me, a dreamy and tender, decades-spanning story about love, sacrifice, memory and immigration."

"In Ewing’s hands and as anchored by two superb performances, Iván and Gerardo’s romance gets scaled up to an epic, a searing saga of the undocumented experience in which love is the binding force."

"I Carry You With Me is an act of memory, of romance, and of friendship all in one — a movie that takes the kind of undocumented immigrants’ saga we think we know and recasts it in a dreamy, bittersweet light."

"Ewing joins a generation of filmmakers who are using every piece of cinematic grammar available to communicate the emotional core of their stories and characters, fusing the impressionistic liberties of drama with more visceral truths to startling and potent effect."

"What’s tender in the film is tinged with sadness. Documentary footage of Iván and Gerardo is in harmony with absorbing performances by Armando Espitia and Christian Vasquez. And these disparate pieces under different leadership wouldn’t come together as masterfully if not for Heidi Ewing’s exceptional vision."