The last days of an elderly couple stricken by dementia.
(NR, 140 min.) 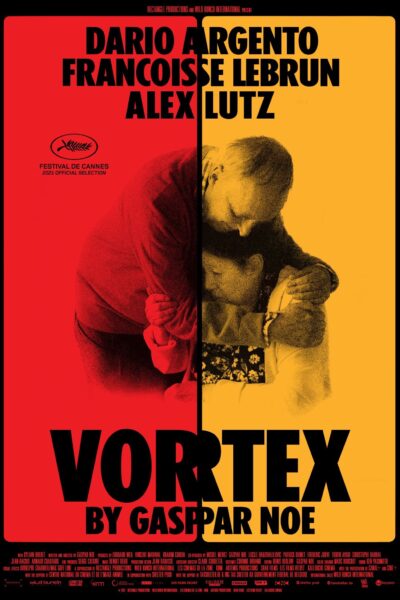 Presented in split screen, Vortex tells the story of an aging couple in a Paris apartment. As the mother (Françoise Lebrun) faces advancing dementia, the father (Dario Argento) tries to care for her while dealing with his own declining health, and their son (Alex Lutz) does his best in spite of his own significant personal problems. [Metacritic]

"A relentlessly powerful piece of film-making."

"It’s his [Noé] most mature film, an unabashedly and audaciously experimental work."

"In terms of scope, ambition and execution, it's one of the finest pictures [Noé's] made."

"With its uncommonly human touch and restless, unflinching visual aesthetic, Vortex might well be Noe’s finest and most thoughtful work."

"A formally bold and distinctive drama, employing a meticulous aesthetic design and two superb lead performances to craft a chilling portrait of the end times."

"Noé’s extraordinary film unfolds as a tale of murmured terrors and nameless dread, creeping softly around a cramped Paris apartment like a cinematic Grim Reaper."

"Unrelenting and inconsolable, with a smattering of compassionate moments, the superb Vortex brings to mind an observation attributed to actress Bette Davis, no less: Getting old ain’t for sissies."

"The Argentinian director’s follow-up to 2019’s Lux Æterna is a typically difficult watch, subjecting us to the grinding indignities of old age, but it also a deeply moving study of lifelong love and loyalty to the bitter end."

"Apart from the inspired split-screen gimmick, the film works because the cast is superb, with Argento as the impatient, angry old lion holding on to his threads of power. Lebrun’s performance, though, is the heart of the film."

"Doubtless, due to Noé’s own real-world experiences, 'Vortex' is a success, if a dolorous one: a dignified, sometimes desperate tribute to, as the dedication reads, 'all those whose minds will decompose before their hearts.'"

"It is a remarkable piece of filmmaking, rigorously controlled in ways that he doesn’t always evince: It’s a bone-deep sensory immersion that never feels merely sensationalist, anchored by two performances of astonishing commitment and emotional power."

"It’s tempting to call the semi-autobiographical film — inspired by both the death of Noé’s mother and his own recovery from a brain hemorrhage (and subsequent sobriety) — Noé’s most personal movie. But what makes Vortex stand out is its cruel universality."

"Vortex tells us something else about old age, something which a severe and high-minded movie like Michael Haneke’s Amour would not grasp: death is chaotic, like life. It ends with things undone and in messy disarray. This is a work of wintry maturity, and real compassion."