The story of T.E. Lawrence, the English officer who successfully united and led the diverse, often warring, Arab tribes during World War I in order to fight the Turks. (PG, 216 min. with a 15 min. intermission) 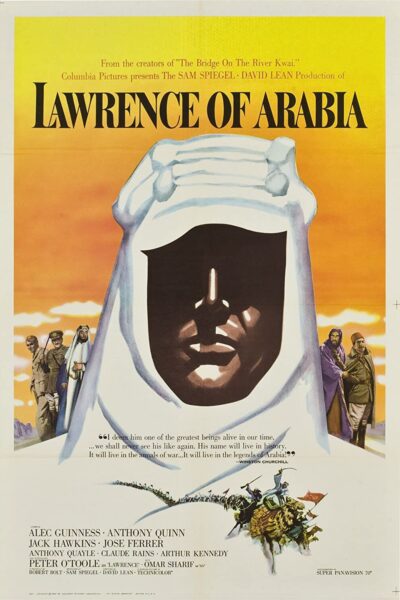 David Lean's splendid biography of the enigmatic T. E. Lawrence paints a complex portrait of the desert-loving Englishman who united Arab tribes in a battle against the Ottoman Turks during World War I. [Sony Pictures]

"It's an astonishing, unrepeatable epic."

"Lawrence is too emotionally overpowering for critical reservations."

"It is hard to recall any film that has put the wide screen to such impressive use."

"What a bold, mad act of genius it was, to make Lawrence of Arabia, or even think that it could be made."

"Released in 1962, it was pretty clearly the most intelligent spectacular within living memory. On its 40th anniversary, it's even better."

"A supremely engrossing film, Lawrence of Arabia makes one forget that it runs nearly three and three-quarter hours: and sends one out haunted and shaken."

"No special effects are front and center here, simply the way a master creator of images pulls us into a dramatic story of great psychological complexity."

"One of the cinema's grandest spectacles, Lawrence of Arabia is at turns exhilarating, devastating, and puzzling as it ponders the mystery of a man who was a mystery to himself."

"Riveting from beginning to end, featuring stellar performances, amazing cinematography, and a story without a trace of fat, the film does everything an epic is supposed to do - and more."

"In short, they don't make 'em like this one anymore. Viewing it is like taking a time machine to a movie age that was more naive than our own in some ways, more sophisticated and ambitious in others."

"The movie manages both senses of scale—the intimate and the expansive—with equal majesty, merging them into something moving, mesmerizing, and poetic, in a way only Lean movies could really manage."

"From the early shots laid on the sun-hot sands there is grandeur and awe-inspiring, stark splendor, against which men fight and die, battle for their ambitions and then see their dearest ideals crushed by uncaring, mercenary politicians."

"It has an epic hero whom it doesn't hero-worship...[O'Toole] brings flawlessly to life the film's vision of a flawed warrior who is corrupted by pride, soured by empty victories and betrayed finally by the jubilant jump of his heart every time he kills."