A young mother reconnects with her larger-than-life playboy father on an adventure through New York.
(R, 96 min.) 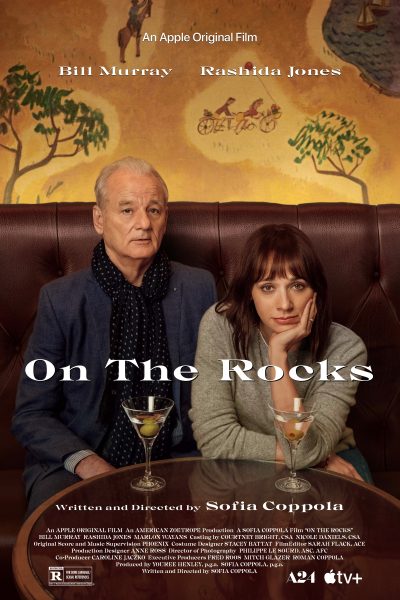 Laura (Rashida Jones) thinks she’s happily hitched, but when her husband Dean (Marlon Wayans) starts logging late hours at the office with a new co-worker, Laura begins to fear the worst. She turns to the one man she suspects may have insight: her charming, impulsive father Felix (Bill Murray), who insists they investigate the situation. As the two begin prowling New York at night, careening from uptown parties to downtown hotspots, they discover at the heart of their journey lies their own relationship.
[Metacritic]

"On the Rocks is the most grounded of Coppola's films, though its wit and charm are just as plentiful."

"An entertaining, wonderfully simple comedy with the qualities of a smooth martini -- it goes down easy, but delivers a bit of kick."

"I don't usually come to Coppola for tidiness, for adorable antics, for a quick look inside the guts of the American cinema and its place on the world stage, but On the Rocks is all that and more."

"Coppola has a lot of fun exploring the conflict between father-daughter affection and sharp attitudinal divides, aided immeasurably by the entertaining chemistry between Jones and Murray."

"In the pantheon of perfect Bill Murray roles - "Caddyshack," "Groundhog Day," "Lost In Translation" - his smooth-talking character in the new comedy "On The Rocks" ranks as one of the best."

"The father/daughter bond is why the film is so enchanting. Watching Felix and Laura eat caviar in a convertible sportscar while on a stakeout is sweet, especially when the moment segues into a comic chase scene."

"Thanks to a master class in comic and dramatic nuance from Bill Murray and Rashida Jones as a father and daughter dealing with cross-generational infidelity, director Sofia Coppola turns a wispy premise into something funny, touching and vital."

"On the Rocks turns into a boozy humanistic hang-out caper movie, one that's light-spirited and compelling, mordantly alive to the ins and outs of marriage, and a winning showcase for Murray's aging-like-fine-whisky brand of world-weary deviltry."

"On The Rocks is almost like a Trojan Horse of intoxicating libations and magical evenings—Murray’s sporty ‘60s candy red Alfa Romeo convertible being the vehicle of these enjoyments— a capricious trick that belies the true nature of its thoughtful and feminine perspective on the difficulties of love, life, marriage, and complex fathers."