A year after the murder of her mother, a teenage girl is terrorized by a new killer, who targets the girl and her friends by using horror films as part of a deadly game. (R, 111 min.) 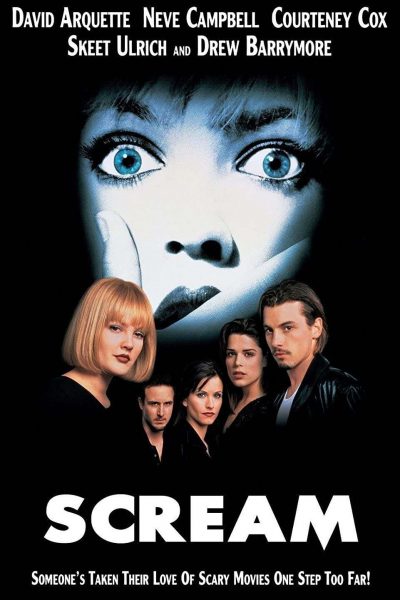 This screening is Free thanks to Friends of the Library.
Visit the Moxie Cinema box office to reserve a seat for the film.

A subversive sendup to the slasher subgenre, Wes Craven's "Scream" was credited with revitalizing the horror genre in the 1990s and spawned a series of sequels that follow final girl Sidney Prescott. Experience the terrifying classic on the big screen during this special free presentation. Sponsored by the Friends of the Library. An "Oh, the Horror!" event.
[Springfield Greene County Library]

Summary: After a series of mysterious deaths befalls their small town, an offbeat group of friends led by Sydney Prescott (Neve Campbell) become the target of a masked killer. As the body count begins to rise, Sydney and her friends find themselves contemplating the "Rules" of horror films as they find themselves living in a real-life one. [Miramax]

"Clever, quick and bloody funny. 'Bloody' being the operative word."

"It's sensational in both senses of the word: a bravura, provocative sendup of horror pictures that's also scary and gruesome yet too swift-moving to lapse into morbidity."

"A meta-horror film that hilariously parodies the genre's clichés with smarts to spare. It's also the scariest [...] movie Craven has made since the first 'A Nightmare on Elm Street.'"

"Craven creates his savviest and most frightening movie since the original 'A Nightmare on Elm Street' by spoofing the horror cliches and simultaneously reinventing them to scare you all over again."